Rafi Mottahedeh: from law firm to company and back to private practice More often than not, when a lawyer moves in-house their career trajectory remains there. But not always. Former Cargill in-house counsel Rafi Mottahedeh recently returned to private practice as head of the transactional tax practice at San Francisco-based law firm Shartsis Friese. Anne Gallagher asks him about the move back to private practice.

Rafi, why did you move back to private practice?

It was not an easy decision by any means and I did think that I would remain in-house for the rest of my career. Cargill has an extremely high-quality tax group that was assembled over a number of years. As a testament to that quality, two of my Cargill colleagues also recently moved back to private practice including Joel Peters-Fransen, who left in 2019 and is a tax partner at Kirkland & Ellis in their San Francisco office. Craig Zaim left in 2018 shortly before I started at Cargill to join Frank Rimmerman as a tax partner in San Francisco.

We were doing exciting transactional tax work at Cargill. It became very clear to me that there was a significant need for our type of experience in the private practice world, especially as Cargill decided to reduce its work in the asset management space and sell businesses like CarVal. When I started talking to Shartsis, I was very motivated to take what I’d learned at Cargill and help a wider variety of clients. I also have to admit that working at an excellent firm like Shartsis with its culture and high-quality work was a huge motivator.

Tell us about a few of those learnings and how you will bring them to your clients.

First and foremost, tax planning is a value-add to every deal but not a driver of it. I have seen tax lawyers come up with overly complex structures that clients cannot successfully implement in the real business world. As a legal adviser to your clients – whether internally or externally – the juice has to be worth the squeeze, so to speak, when dealing with complexity.

Also, as a tax professional we are working as much with the business professionals in the company as we are with the lawyers. That means you need to provide tax advice in a concise manner that is actionable by an educated professional who is not a lawyer. For most matters, someone should be able to spend no more than five minutes hearing (or reading) your explanation of the issues and law, after which they should be able to quickly make a decision.

Remember too that the telephone is usually your friend. If you think there is going to be a bunch of back and forth on an issue because there may be follow-up questions, get on a call. It can often be more efficient.

Having the benefit of both company and law firm experience, what advice would you now give to young lawyers?

Not all law jobs are alike. You need to find the place that provides the right fit, where your skills are appreciated and valued. An in-house role can range from being someone who manages multiple outside legal service providers to one where you are doing everything yourself without any outside help. Know the job and know how you function best.

Also understand that if you’re not at least 15 years into your career as a lawyer, any job you take should help you develop a skill. Perhaps you’re already there technically, but maybe you haven’t had experience with direct reports (especially direct reports who have many of their own direct reports). Maybe you haven’t been sufficiently involved in client pitches. Think about where you could improve as an lawyer (Note: we all can improve), and chose a job that both plays to your strengths and helps you build your skills in areas where they aren’t at the level you want.

Anything else you want to add?

Don’t be a jerk. Being a decent human being will eventually reap you huge rewards personally, professionally, and financially. Being kind to someone and willing to help them is remembered years later. Part of why I’m good at my job is because I can pick up the phone and call someone to talk about unique tax issues that may be outside of what I do every day. I return that favor regularly.

Rafi Mottahedeh is a partner and co-chair of Shartsis Friese's tax department.

The original Q&A with Rafi Mottahedeh was published in the Global Legal Post on 28 may 2021 and is re-published here for reference.

Rafi Mottahedeh: 'Part of the joy for me is explaining byzantine tax laws in a way that makes sense to our business teams'

Cargill's tax counsel on the 'why' of tax law, being diverse in the legal profession and adapting to a Minnesota lifestyle 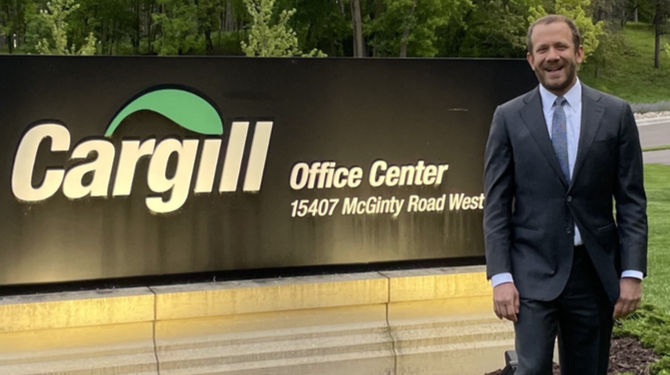 You speak several languages – and have a university degree in Near Eastern Languages and Civilisations. How did your path lead you to the law?

Well, I wouldn’t say I speak several languages now. They’re pretty rusty at this point! I’ve always had a love for languages and cultures and have travelled to more than 50 countries. Similarly, I’ve always wanted to work in an international environment. When I was young, I thought that might lead me to a career as a flight attendant or in hotel management. However, when I went to the University of Chicago, we were required to read everything from Adam Smith to Milton Friedman to Karl Marx. I became interested in finance and the economic underpinning of our global economy. That led me to law school, a focus on tax, and then a second law degree (an LLM) in tax law from New York University.

Many people might think tax law is something sort of dull.  What is it about tax law that interests you?

When I was in law school, I found law really interesting but what it didn’t answer for me was the ‘why’. That is, we litigate about money, we have transactions that involve money, but what are the economic underpinnings of these things? I was an avid reader of the Becker-Posner blog on law and economics, but I wanted to be involved with thinking about money in actual transactions like you read about in the New York Times DealBook. Taxes affect the bottom line in a business, not unlike the cost of raw materials. So you could say the beauty of tax is that, unlike most other areas of law, you are closer to the business as taxes are a cost, not unlike corn or wheat or paper pulp.

An aspect of my job that I absolutely love is how integrated I am with our business teams. Frankly, they usually see the huge value-add that a good tax team provides, because it all boils down to quantifiable amounts of money. At a US multinational like Cargill with operations in more than 70 countries, you get the added bonus of all the national tax systems overlapping with each other and the US tax system. So, you are in some ways dealing with a giant jigsaw puzzle of costs and consequences. Some of my friends like to equate it to conducting a symphony.

This is work that really pushes me technically, and part of the joy for me in my work is how to best explain byzantine tax laws in a concise way that makes sense to our business teams. Cargill pays a lot of taxes around the world, which always keeps us on our toes!

You told me how important diversity is to you, particularly as a gay man. Is there still a stigma of being a gay man in the legal profession?

I have to say no. Probably only once in my entire career have I ever felt treated differently; that wasn’t at Cargill. One of the reasons I was attracted to Cargill is because of its exceptional commitment to diversity. It is not just lip service. I see their commitment every day, and seeing it done right, as we do it at Cargill, is a sea change in creating an inclusive, global environment. I feel comfortable bringing my whole self to work every day, and we are very fortunate at Cargill that everyone can feel that way.

For most of your career, you lived in Chicago, a large urban area.  What was it like to move to the Minneapolis area?

To be honest, I was initially apprehensive about working at an agriculture company in suburban Minneapolis. My apprehension was totally unfounded. Not only is Minneapolis a very international city with companies like Target, Medtronic, 3M, General Mills, and UnitedHealth Group headquartered here, but all these businesses bring people together from all over the world. As someone who likes to travel the world, I’m actually living my childhood dream—but it’s not at all the way I imagined it would happen. I know dozens of people from Brazil in what are called the Twin Cities (Minneapolis and St. Paul) who came here as ex-pats for work and stayed! It’s also a place where I had my first Somali meal, and we have an awesome community of Somali-Americans in Minneapolis.

You seem to have taken to the Minnesota lifestyle.  Is that right?

Yes, that’s right. Hunting is very big in Minnesota, and I recently went on my first hunting trip. There are many wild turkeys here, and we cooked one as part of a dish called Turkey Yucatan. It was a recipe in a cookbook, Pheasant, Quail, Cottontail by Hank Shaw. I mentioned the Somali influence here, which led me to buy another cookbook—In Bibi’s Kitchen: The Recipes and Stories of Grandmothers from Eight African Countries that Touch the Indian Ocean by Hawa Hassan. Maybe to offset all this cooking, I’m doing five triathlons this summer and an Ironman in 2022. I’m also going to start working on one of my bucket list items and become certified as a group fitness instructor.

Based in Minnetonka, Minnesota, Cargill is one of the world’s largest privately held companies, with 155,000 employees in 70 countries providing agricultural products, services and risk management solutions.